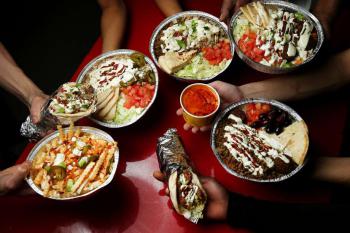 There’s a little New York in our San Francisco. And it tastes pretty good.

Consider it one step in the brand’s ongoing global takeover, part of 450 planned locations worldwide. Halal Guys opened in San Jose last year, and is planning locations for Berkeley and the South Bay.

Halal Guys hysteria in the Bay Area has been bubbling since 2015, as word spread it was heading west, among other places. The excitement hasn’t waned in 2017, even with Nobu going to Palo Alto, French Laundry finishing its renovation project and China Live set to debut.

According to Ahmed Abdrabo, Halal Guys CEO and son of one of the original founders, San Francisco food diversity drew him to the area. That, and finding the right business partners.

“The Bay Area was appealing for us because of its foodie culture,” Abdrabo said. “We were also fortunate enough to have had an incredible franchise partner (Binh Tran) step forward and express interest in developing the area,” he said.

In the past, when food chains had their West Coast awakening, they usually bent to California sensibilities by throwing region-specific items on the menu. Not at Halal Guys. Abdrabo said the O’Farrell Street menu is exactly what you’d get in New York. The same can be said for future destinations.

This is because the Halal Guys concept is rooted in simplicity.

Founded by three Egyptian immigrants — Mohammed Abouelenein, Ahmed Elsaka and Abdelbaset Elsayed — Halal Guys first opened in the 1990s as a hot dog cart in Manhattan, on the corner of 53rd Street and Sixth Avenue.

Once they moved to halal dishes, they changed the perception of New York street food, broadening it from hot dog water and white onions to gyros and white sauce.

Their growth in popularity never stopped. But within the ascension over the years, there may be room to tweak the business model, Abdrabo said. The idea is to listen to the people buying the food.

“While we always want to be true to who we are and what made our fans so passionate about our food, we also owe it to them to listen to their feedback,” Abdrabo said.

Abdrabo said it’s seeing those lines and hearing how people are willing to wait for a dish that keep him going. He said he’s witnessed over time that their food crosses cultural and ethnic backgrounds.