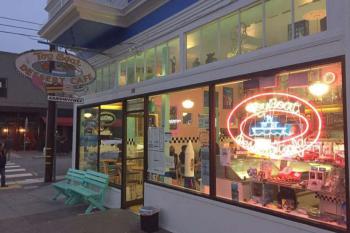 Just two months after owners Jesse and Roberta Fink of Toy Boat Dessert Cafe announced their plans to put the beloved shop up for sale after 35 years, one local has announced she will be taking up the mantle: Amanda Michael, owner of Jane the Bakery, said she will be taking over the spot and preserving much of what makes this place well-loved.

The news was first reported by Hoodline and Michael confirmed the takeover to SFGATE, saying if all goes to plan, it will be a "done deal" this week.

"My kids are beyond excited," Michael said.

Having grown up in San Francisco, Michael said that Toy Boat has long been part of her experience of living in the city. From her time as a teenager and Toy Boat being her "high school hangout place" to more recent times of bringing her own children there, the cafe has long held a "soft spot" in her heart, and the plan is not to change it too much, and to preserve the vibe of the place, toys and all.

"It'll be mostly a Toy Boat experience," Michael said of her plans. "We're going to keep the Double Rainbow ice cream, we're going to change the menu a little bit in terms of offering grab-and-go [items], similar to what we have at Jane the Bakery.

"We'll have our salads and sandwiches, but everything will be packaged sort of for the quick, in and out transaction," she added. "And we'll also be doing our desserts and pastries there, although the plated desserts will not come back until there's proper dining again."

When asked what sparked her interest in buying the dessert place, given the uncertainty of businesses under the pandemic, Michael called the venture a "boondoggle" but stated that she loves the community of the Inner Richmond neighborhood.

"When we saw that they were selling it, I was like, 'Oh God, [running Toy Boat] would be so great.' It would be such a bummer for that to go away. And it just started the wheels turning a little bit for me, because part of this whole pandemic you really start to reevaluate your business model and try to figure out what's working. ... I love that neighborhood and looking at that location on the corner there, it just made me start thinking we could sort of go in there and — like [the former owners] were making all their food and doing everything there — but we can do it a little bit differently ... just a smaller footprint really focused on the grab-and-go. And I love being along the Geary corridor, so it works for us."

"I also felt like there's so much stuff that's just so stressful right now and there was a part of me that's like, 'You know what, an ice cream shop is just what I need,'" Michael added. "There's something about it that sort of feels like those simple pleasures, that you can actually just enjoy a scoop of ice cream and it's like, maybe that's not a bad thing to look at right now."

Michael said she hopes to open by the end of August or by early September, after some minor upgrades to shop, opening under the moniker Toy Boat by Jane. Although the hours aren't quite set yet, Michael imagines they'll have an early start at 7 or 8 a.m., and stay open into the evening hours, depending on the crowd. Despite the re-opening of Toy Boat being weeks away, already the community — and even Jane the Bakery staffers — have expressed excitement over the news of the takeover. It's something positive to look forward to, in an industry with plenty of bad news happening around it.

"You think about all these kids and their whole schooling has been disrupted, and all of these [other] things have been disrupted," Michael said. "For us in hospitality, staying open through this is to have that sort of day to day touch point with your customers, still. You might be behind a mask and you have had to go behind the plexiglass, but you can still make eye contact, say hi, and I think these little touch points of normalcy are really good for us."

Especially when ice cream is involved.

Toy Boat by Jane is located at 410 Clement St. in San Francisco. It is set to open in late August.