Proposed 'mini-mall' at Pier 29 meets with stiff opposition, as tussle over waterfront continues 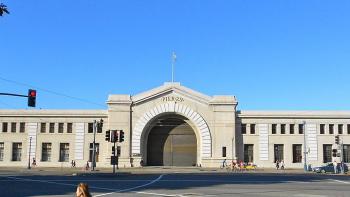 A plan to bring retail space to San Francisco Pier 29 is drawing fire from local groups, including the Sierra Club, which said in a letter this week the current plan could turn the waterfront space into a “mini-mall.”

The existing proposal for rejuvenating the space, dormant since a fire took it out of the running for the home base of the America's Cup, includes giving retail subtenants that sell San Francisco wares front running priority.

"Jamestown LLC, a real-estate investment company, is planning to build a brewery, winery and coffee roaster at Pier 29 under a proposed 15-year lease with the Port," the San Francisco Examiner reports. "On Tuesday, the Port Commission will review a set of non-binding terms that would allow the Port and Jamestown to continue negotiating a lease."

But the Sierra Club said in a letter to the Port Commission this week that those plans will violate the Waterfront Land Use Plan of 1990, and won't include the amount of recreational waterfront space required. They dubbed the project a “mini-mall retail center,” an assertion that was firmly rebutted by Port executives this week.

“The Port Commission and staff invest a lot of effort to balance diverse waterfront needs and interests, and collaborate with agency, community and development partners to make Port improvements work,” Port Executive Director Elaine Forbes wrote in a letter to the commission.

Neither the Sierra Club nor the Port Commission responded to requests for comment Tuesday.