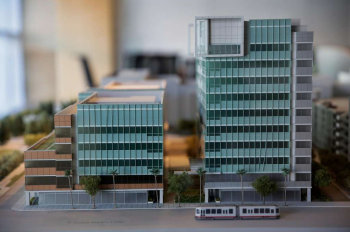 In the dark days of 2010, at the depths of the Great Recession, Mission Bay’s biggest commercial developer did something that seemed prudent at the time: It unloaded 14 acres of land to Salesforce for $287 million.

The deal resulted in a net gain of $60 million for the property owner, Alexandria Real Estate Equities, and reduced risk at a time of uncertain economic outlook. But six years later, Alexandria Chief Operating Officer Stephen Richardson can’t help but wish they had the dirt back.

“I think we would do very well,” he said. “There is more than 2 million square feet of tenant demand for life-science space between here (Mission Bay) and Stanford University.”

For all the complaints about Mission Bay — that it’s sterile, that it lacks retail and street life, that Muni service is insufficient — one thing is certain: Its cluster of commercial biotechdevelopment has been a booming success. So much so that demand for space has far outstripped supply and the area’s primary commercial development is pushing north into South of Market.

Mission Bay has about 1.5 million square feet of biotech space, not including UCSF research buildings or affiliated facilities like the California Institute for Quantitative Biosciences, known as QB3, and the J. David Gladstone Institutes, which collaborate with commercial life-science companies.

That space is 100 percent leased to more than 50 tenants. It’s been over two years since therewere any vacancies, and any sublease that becomes available is absorbed by neighboring tenants before it hits the market.

“We have no available inventory — the team upstairs is working hard every day to identify new parcels around Mission Bay to see how we can expand,” said Richardson.

But what now seems like the inevitable success of a biotech cluster at Mission Bay was very much a gamble in 2005 when Alexandria acquired 27.5 acres of former Southern Pacific rail yards — adirt expanse between 16th Street to the south and what would become Mission Bay Boulevard to the north.

At first, Alexandria sublet office space from master developer Catellus in an old Southern Pacific warehouse next to a golf driving range, where designers built a three-dimensional model of all that the neighborhood was to become: sparkling apartment buildings, lush parks, the 43-acre UCSF research campus. Richardson and other executives would talk about how the synergy between UCSF and private biotech firms would create a community similar to the one that had sprung up in Cambridge, Mass., around Harvard and MIT.

“Here we had this vast expanse of dirt and we would say ‘look you’re standing in the middle of UCSF’s campus here. And this will be like Cambridge. And here we’ll have early stage companies and big pharmaceutical companies. We’ll have venture capital people here,’” recalled Richardson. “It was a lot of arm-waving. We were selling the dream.”

Without a tenant in hand, Alexandria started building a 160,000-square-foot building at 1700 Owens St., despite critics saying Mission Bay would never lure tenants from South San Francisco, home to the large Genentech and Amgen biotech campuses. But before the building was complete, the first tenant signed on: Sirna Therapeutics, which was looking to relocate from Colorado to the Bay Area.

In what turned out to be a trend, Sirna was bought by the pharmaceutical giant Merck, which expanded the size of the original lease. One of the next tenants to take a chance on the neighborhood, Pharmion, was acquired by Celgene, a global company with a market capitalization of $92 billion. Those two were followed by Pfizer, Nektar, Bayer and other large pharmaceutical companies.

“That has been a theme. Startup companies move in and big companies acquire them and grow the footprint,” said Richardson.

But while Mission Bay was originally seen as a place that would benefit from spillover of the South of Market boom, it hasn’t turned out that way. Instead, Mission Bay has developed faster than SoMa.

“The entitlements were completed in 1998 and it was supposed to be a 40-year development plan.” said Alexandria Vice President Terezia Nemeth. “Here we are 20 years later — and it’s done.”

Only in the last two years, with Mission Bay spoken for, has Alexandria turned north to SoMa. The group is collaborating with TMG Partners on two South of Market developments — 510 Townsend St. and 505 Brannan St. — which are 100 percent leased to tech companies Pinterest and Stripe.

Alexandria is also partnering with TMG on the redevelopment of the San Francisco Tennis Club property at Sixth and Brannan streets, which will include 750,000 square feet of office or biotechspace along with affordable housing, a child care center, and a subterranean tennis facility.

“I think SoMa is going to be more of an integrated district with Mission Bay over time. You are going to have a mix of science and tech companies in the same innovation districts,” Richardsonsaid.

Rent for lab space in Mission Bay averages about $65 a square foot for a “triple net” lease, which means that tenants are responsible for expenses. That’s about 8.3 percent higher than last yearand about 13 percent higher than the Bay Area’s largest biotech cluster, in South San Francisco.

Christan Basconcillo, research manager for the broker JLL, said it’s gotten to the point wheresuccessful biotech startups have to leave Mission Bay in order to grow.

“A lot of them have migrated over to the East Bay,” he said. “It’s tough. There is a lot of pent up demand and not a lot of options.”