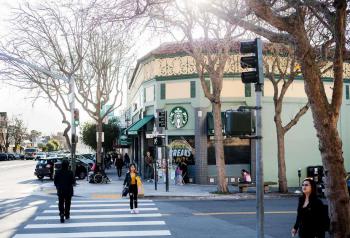 The only thing that spread faster than the flames that struck the heart of West Portal’s commercial district last week was news of what had happened.

Firefighters were barely on the scene outside Papenhausen Hardware at 10:42 p.m. on Jan. 23 when a crowd gathered outside the police lines to commiserate and gather information.

The three-alarm fire damaged West Portal Daily, a newsstand and speciality grocer with a heavy Irish immigrant clientele; Sloane Square Salon, which is owned by a longtime neighborhood hairdresser; and Papenhausen, which has been providing West Portal with screws and drill bits since 1936. The fire is still under investigation and it’s likely to be a year before the businesses will be able to reopen.

“There is no feeling to describe it — it’s not shock or fear, it’s just disbelief,” said Papemnhausen Hardware owner Matt Rogers. “You just think, ‘no that’s not possible, you’re wrong.’”

At a time when neighborhood retail districts from the Castro to Cow Hollow to Noe Valley are struggling with historically high vacancy rates, fog-lined West Portal remains a model of vibrancy — the three-block retail strip has has only three major vacancies, and two of them have been leased to new tenants who are building out the spaces.

But merchants and residents worry that the fire, coming at a time when retail everywhere is struggling with rising commercial rents and competition from online competitors, could drag down the corridor.

“My own concern is that with those stores on the first block closed, it could depress the overall foot traffic on the Avenue, and harm the commerce for the other businesses up and down the street,” said Greater West Portal Neighborhood Association President Thomas Kanaley, who lives with his wife and six children a half a block from the village. “None of us want that.”

West Portal Avenue does not suffer from a lack of foot traffic. After work commuters fill bars like the historic Philosopher’s Club next to the Muni stop while after school kids from local schools like St. Brendan’s and St. Cecelia’s wander down for bubble tea or ice cream.

An increase in young families moving in have brought new businesses that cater to kids — several tutoring centers and an indoor play space called Peekaboo Factory. When businesses have shuttered over the last few years the spaces have been quickly filled by businesses like Noe Valley Bakery. Lemonade and Ballast Coffee.

Papenhausen Hardware, along with the movie theater CineArts at the Empire and Bookshop West Portal, have long been the anchors that lure pedestrians to the strip, business leaders say. The three businesses sit on the block closest to the Muni station, drawing commuters and visitors from surrounding neighborhoods.

Diedre Von Rock, an attorney who lives and works in West Portal, said “Papenhausen has been the heart of that block for a long time.

“Not too many Saturdays have gone by where I haven’t popped in there for a light bulb or a Mason jar. Everyone is on a first name basis there,” she said. “Their expertise and kindness will be missed.”

Rogers started working at the hardware store as a San Francisco State University student and has owned it for more than 30 years. Contrary to national retail trends, sales at the store have been booming, and Rogers has been able to add additional part-time staff.

“We have been doing really well the past couple of years, growing at a nice steady pace,” he said. “We are hoping we can get reopened and pick up where we left off.”

Sloane Square Salon owner Elana Weinstein, who rushed to her business from her nearby home when the fire was still attacking the roof of the building, said she, like most of the hairdressers in West Portal, have worked in the neighborhood for two decades or more.

“It’s a small town in the middle of the big, bustling city,” Weinstein said. “Everyone who walks by you knows everyone by name. You stop in and talk. You buy each other coffee.”

Elana Weinstein searches for her business license among the remains of the Sloane Square Beauty Salon on Tuesday, Jan. 30, 2018, in San Francisco. The salon and neighboring West Portal businesses sustained damage during a fire on January 23.

Supervisor Norman Yee, who represents West Portal, called Papenhausen “a symbolic anchor” but he said the commercial district would be fine. “When I compare it to other parts of the city, it’s doing pretty well,” he said.

Rogers said he has been inundated with notes and calls from customers, including from prominent street artist Aaron De La Cruz, who offered to paint a mural on the boarded-up store.

Rogers has posted signs saying that the store staff has been “overwhelmed with handshakes, hugs, and well wishes.”

“It takes an event like this to show us how small San Francisco really is,” the note read.